A new agent is now available in the game! Sam Monroe, also known as Agent "Alligator", has joined the Warface ranks! Sam is an excellent sniper, who has a thing for diving equipment.

The new Agent is part of the seasonal update "First Division". Learn more about the new season in a dedicated publication.

Sam was born in a small town in the heart of the Louisiana Bayou. He was an exceptional swimmer ever since he was a kid, excellently wielded weapons and was able to survive out in the wild, so the selection for the "Green Berets" wasn't a challenge for him. He was assigned to the swimmer squad, with whom Sam underwent hundreds of operations over the course of five years. Due to his natural senses and cold blood, he was an exceptional scout and saboteur: he could sneak into the center of an enemy base without being seen, strike unnoticed, and quite literally disappear into the waters of the nearest river or marsh.

At the same time, Sam was very willful and often returned to the brig right after missions. He was constantly arguing with his superiors and didn't like working in a team, considering fellow officers incompetent (which was typically the case), and often just a burden. Sometimes he’d come back alone from missions, and the unit would gossip that he’d left his comrades to die, which was untrue and unfair. Despite his temper, Sam was an outstanding and dependable partner, but missions for his squad were often a one-way ticket. And yet, time after time again, he managed to survive, but one day he didn’t return. Sam wasn't killed or even injured, he simply got tired of the army service with all its problems, and he, not wanting to bother with the paperwork and official resignation, simply deserted and began to work for himself as a freelance mercenary. The army hunted him for a long time, but to no avail.

Sam was eventually caught. However, the authorities had to organize a large-scale operation for this purpose and, of course, not relying on taxpayers' money. Sam was offered an alternative: either he got locked up for a very long time, or he agreed to take part in a peculiar event.

Learn more about the agent by watching the trailer:

The game now offers cool weapons from the "Alligator" series — AWP, H&K VP9 Match and the Balisong Knife. The novelties are already available in the game shop. For the charm enthusiasts, the agent set also includes a new weapon charm — decorate your arms with an all-new accessory!

In addition, achievements for kills made with the new weapon models and unique distinctions designed in the agent style have been added to the game. Destroy enemies with "Alligator" arms, and earn cool achievements to pin them on your profile!

The game now features contracts with the agent content. Complete them and get powerful "Alligator" arms, a box with the Agent Alligator skin, unique distinctions set in the agent style, a weapon charm and other useful items. 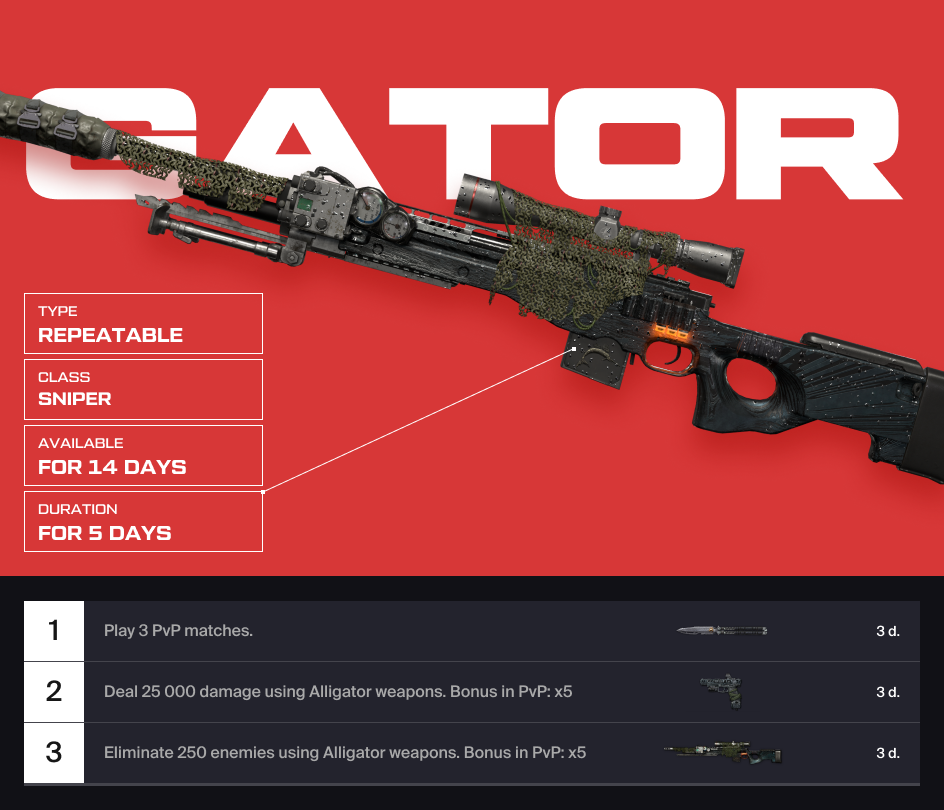